It’s the eve of our anniversary and we’ve decided to fly to San Diego for a long weekend together. We take a late evening flight, wait for our baggage a bit longer than usual but it’s all okay. Although Michael makes a bathroom stop just in time to be asked “How tall ARE you?” 6-4 “Wow – that’s the perfect height!” as he’s rejoining me, I decide to wait until we get to the hotel to go to the bathroom because I’m weird that way. After sitting in traffic for a train or something, we get to the hotel and get checked in, only to discover that not only do we not have a King bed but it appears that what we have instead is a pair of Doubles. 6’4” is not the perfect height for a Double bed, especially on one’s anniversary.

Now, we don’t really need a King but but we do call Michael the Tall Guy for a reason and he does really need at least a Queen. So, I stand and wait in the room, not sitting, not touching anything so as to not disrupt anything – which of course means not going to the bathroom. And the Tall Guy goes back down to the front desk to remind them that we had been confirmed to have a King. With a balcony.

I hear later that there were some troubles getting this all sorted out and that other people apparently had trouble as well. This would explain the rather extraordinary amount of time I spent standing there, beginning to feel like the one lone idiot waiting for the pedestrian walk sign while everyone else just takes advantage of the break in traffic. An idiot who does really need to use the toilet by this point.

Eventually though, he returns, we gather up our things, and traipse off to another room. As we open the door, I see on the table a cute little snack and I’m just travel-weary enough to think for the briefest of moments that this is for us – how sweet!

Then I realize that unlike the time we stayed in the amazing Magnolia Hotel in Omaha for the start and the finish of RAGBRAI over our anniversary a few years ago where we received a perfectly delightful and also amazing “amenity”, THIS hotel has no idea that it’s our anniversary. More importantly, this is not us. 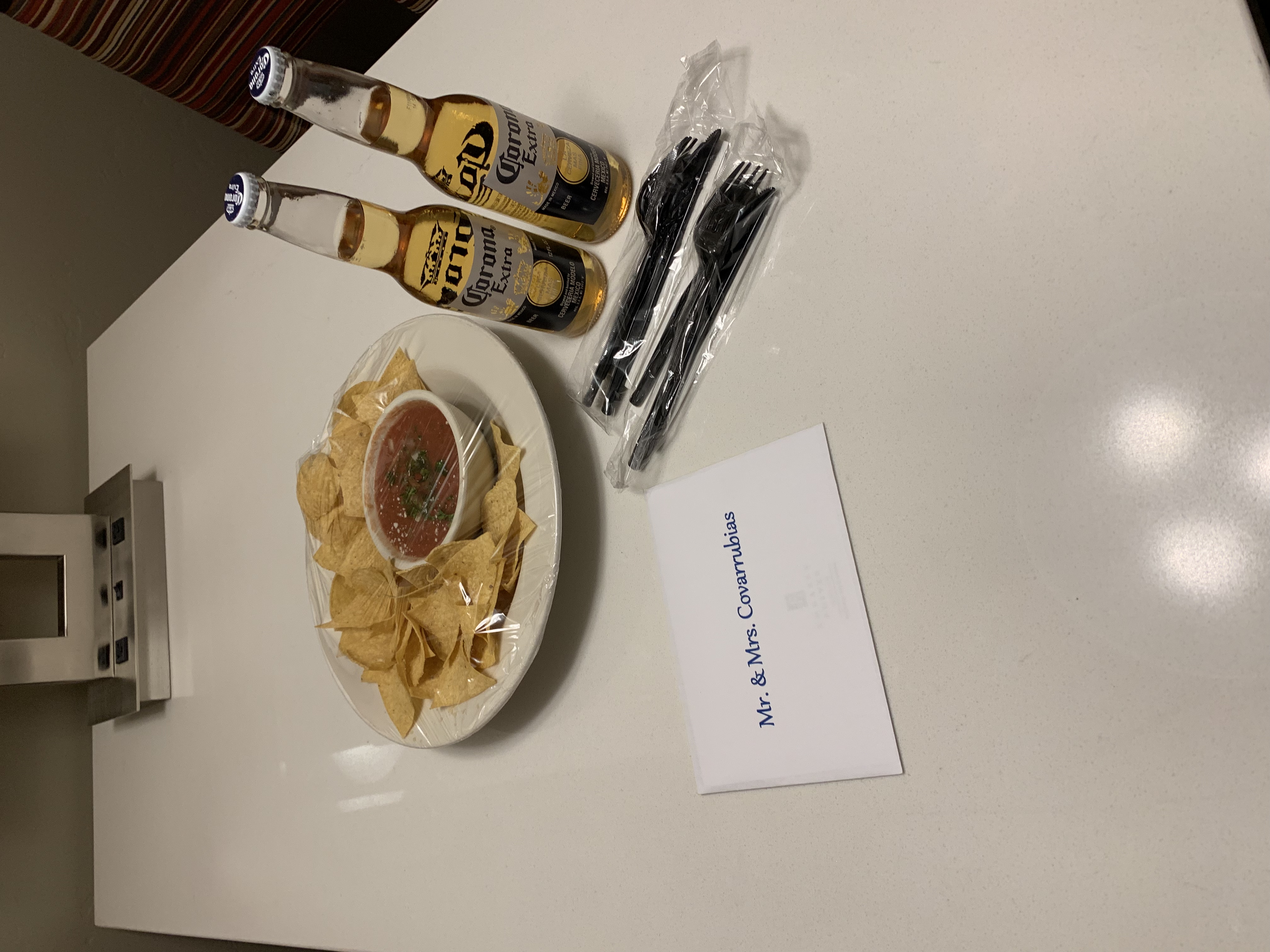 So now we’re worried about depriving some other couple celebrating a special occasion of their room, or at least of their “amenity” (seriously – that’s what they called it, but who ever uses the word in the singular?) so back down to the front desk we go. Both of us this time. With our luggage.

Although I am a touch concerned that it’s late enough that fatigue will cause us to get snappy ourselves, I am on vacation and determined to not take these troubles out on the guy trying his best to help us. I happen to look at the time and see that it is midnight; I go over to Michael and say Happy Anniversary and give him a quick kiss just before he steps up to the front desk for our turn.

Actually, that’s not all I said – I also whispered that this bit of a blip is nothing compared to discovering on the morning of our wedding day twenty-seven years ago that my bouquet of roses had frozen overnight in the refrigerator and had turned all brown and wilted.

Fun fact – that refrigerator was in the hotel room of a friend of mine I have known from childhood – the son of my dad’s squadron buddy, he is like a brother or close cousin to me. He lives in San Diego himself these days and it sounds like we’ll have a chance to get together this weekend. The way the puzzle pieces of life can fit together sometimes is pretty fascinating.

After yet another conversation with the guy at the front desk, I have no idea where the other couple will stay but we’re told that no, this really is our room now so we head back up again. They promise to come up and collect the amenity, which I correctly interpret will take longer than we want it to. We take our time getting situated and even enjoy a small bite of our own “amenity” Michael brought with us. 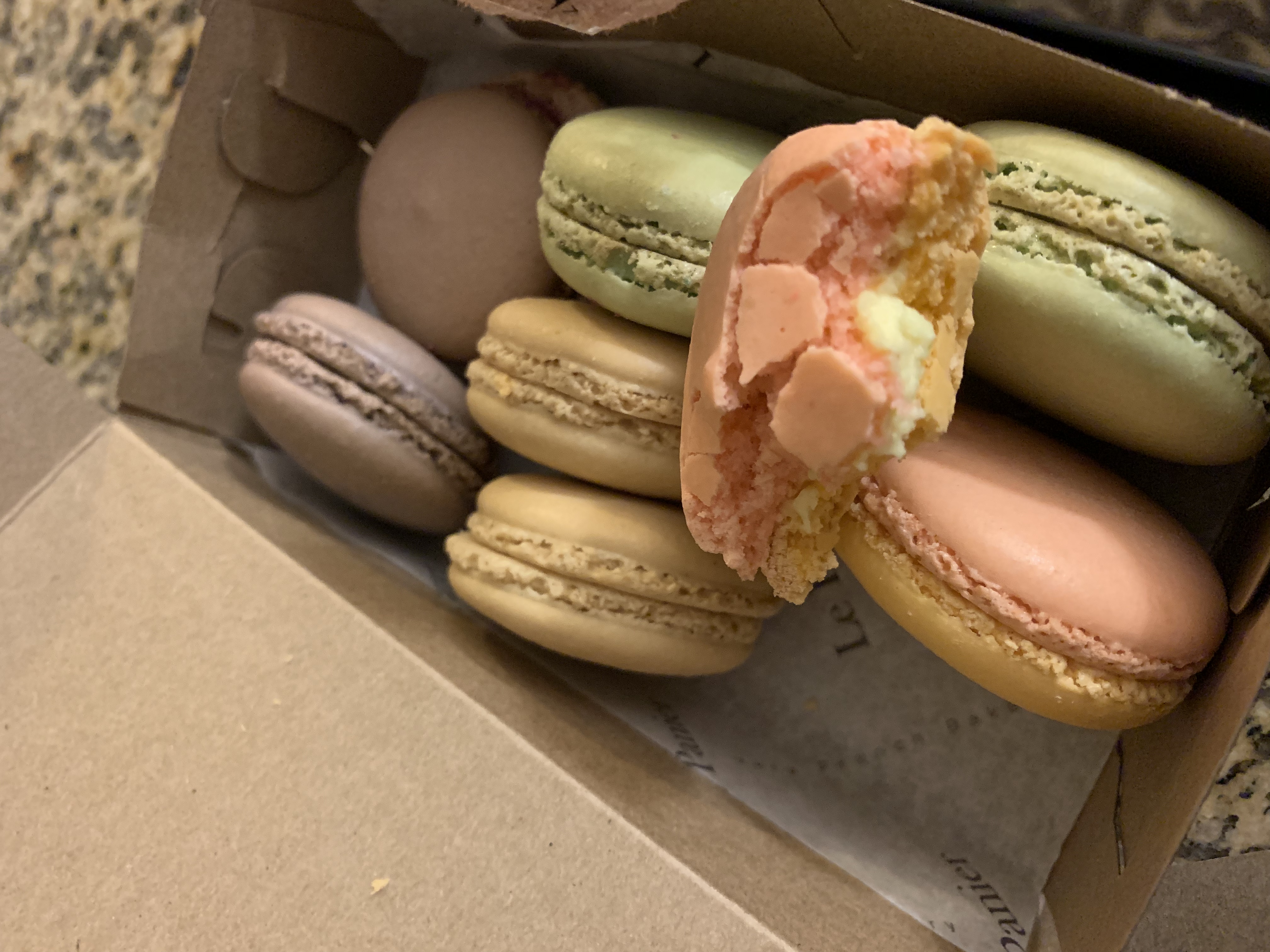 While I’m not above a cold Corona with chips and salsa, the macarons are much more aligned with my sense of celebration and I am not particularly tempted by the surely now-warm beer. When we’ve waited as long as we care to, we set the amenity outside the door for someone to collect at their leisure and put out the Do Not Disturb sign.

Happy 27, Tall Guy – here’s to another few more years of racking up interesting stories to go along with the fun adventure that is our life together!

Update 10:26am – the amenity is still outside our door! 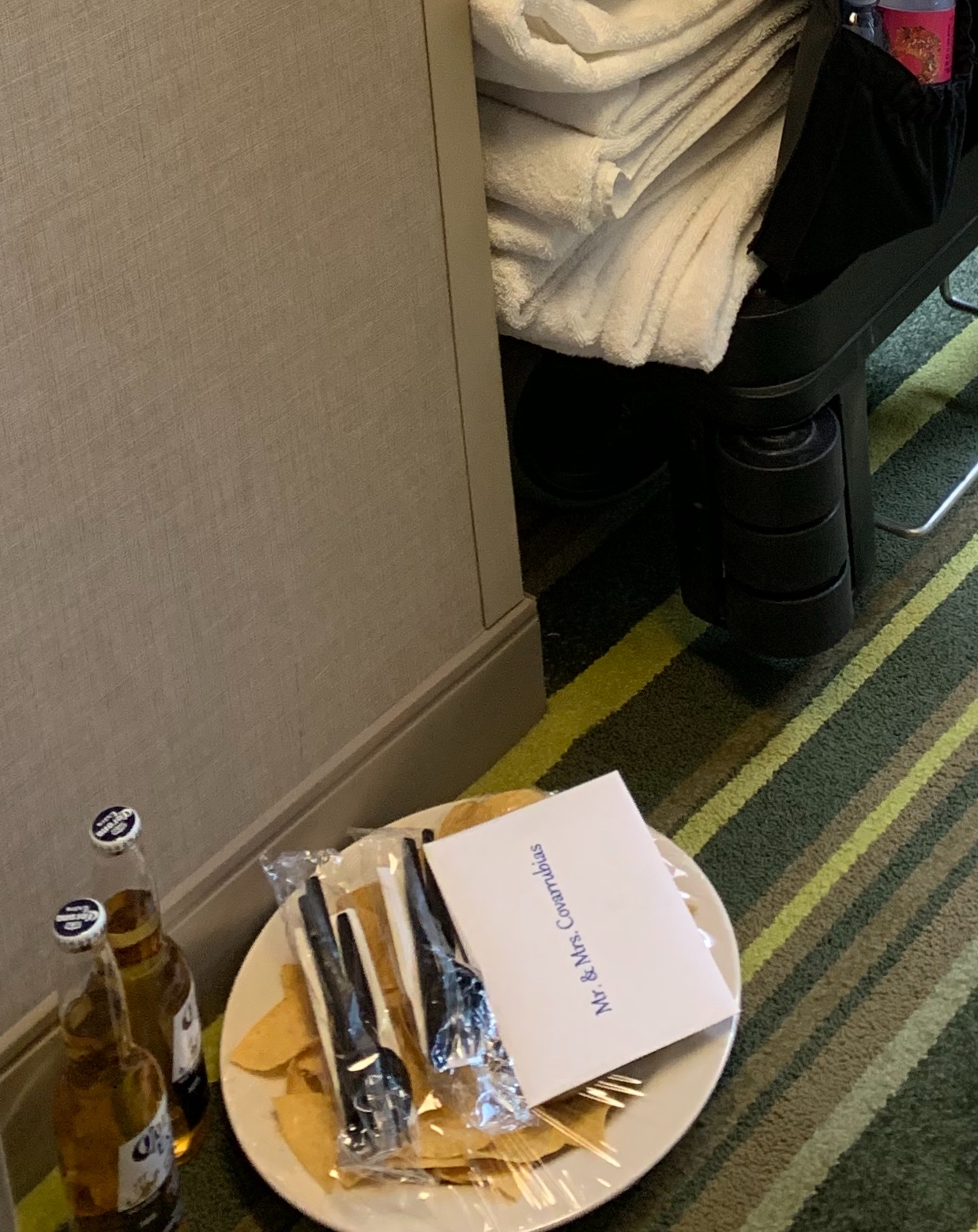 My lord, what is the world coming to – did these people not ever get their beer and chips?! Did they ever show up for a room and get someplace to sleep? Not knowing this is going to seriously disturb my calm!